A schoolgirl who dreamed of working on chemical transformation

“We are all individuals with different abilities and skills and we have every right to use them without discrimination in the areas we are interested in and in which we are competent.” 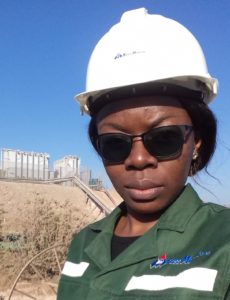 Jovitte Kahindo Mubawa, a junior metallurgist supervisor at Boss Mining in the Democratic Republic of Congo’s (DRC’s) Katanga Province for the past 16 months, sings and listens to classical music as well as opera for fun.

The 25 year old, who studied Industrial Chemistry at University of Lubumbashi, believes not enough is done to encourage girls to seek careers in mining. Born in Gova, North Kivu, on the Rwandan border, she grew up wanting to be a doctor, opting for secondary chemistry-biology as a school subject. Then so enjoyed chemistry that she turned to her lawyer father for advice and they researched sectors involving it.

She shares, “I was already dreaming of working on chemical transformation in a processing plant when an uncle told us that Lubumbashi was offering a chemistry engineering degree. I told myself, that’s what I will do, even if it means moving far from the family. So, aged 18 when I finished school, I left Goma to study at the university.”

With men outnumbering women 10 to 1 in her classes, Jovitte was pleasantly surprised when her professors insisted that the women were to be treated with respect for choosing studies that many men lacked the courage to tackle.

After graduating she joined Boss Mining in October 2016 and today her job entails following the operating and metallurgical parameters of solvent extraction and electrowinning. The former purifies and upgrades the pregnant leach solution produced after the solubilisation of the copper contained in the ore. This allows high copper quality. Electrowinning is the process by which copper in solution is reduced and electrowon as pure metallic copper in the form of cathodes.

“It is my first experience in metallurgy. And it’s really interesting for me to see practically how a whole metallurgical process takes place.”

Jovitte is quick to acknowledge the tremendous support she received from her parents. “They always showed how proud they were of my choices. Quick to encourage me, they sacrificed a lot to ensure I could study in the right conditions.”

Today Jovitte dreams of climbing the executive ladder. “It would add value to my career,” she says.

Although ability is a strong predictor for what subjects teenagers choose, a growing body of research shows that ability does not entirely explain how boys and girls make their educational choices. Girls frequently outperform boys in male-dominated areas, but when assessed purely on ability, there should be more boys in feminine tracks and more girls in masculine tracks.

The social environment in which boys and girls grow up (i.e. peers, parents, media, school) conveys cultural beliefs about what is “appropriate” male or female behaviour. Adolescents then internalise these gender role expectations and opt for subjects accordingly. (http://bit.ly/2to47Oo)