The secret of success is constancy to purpose

8th March is International Women’s Day (IWD). ERG Africa is sharing an inspiring series of narratives on our Women in Mining to celebrate their tenacious achievements. We kick off the series with a focus on Gracia Kapisha Change. We will continue our stories up until National Women’s Day happening in South Africa on 9 August. Interestingly, the theme for IWD 2018 is #PressforProgress, a nod to the growing global movement of advocacy, activism and support surrounding gender parity and sexism. Inspired by the #MeToo and #TimesUp movements, the aim of the theme is to encourage people to continue the vocal fight for equality. 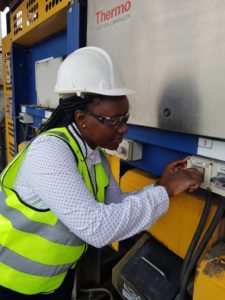 “Self-motivation is the key. Do not enter or approach the mining world with a negative mind set or prejudices, instead focus on your goals.”

Gracia Kapisha Change, a Congolese chemical engineer who has for the past five years worked as a plant metallurgist at Frontier Mine in the DRC, urges other women to break into the male-dominated mining sector.

“Yes,” she concedes, “you will have to work hard to achieve success but it’s not a big deal. Respect is earned. You must present yourself well and show you are serious about your work”.

“One of my favourite quotes is from Maya Angelou: ‘We may encounter many defeats but we must not be defeated’. It keeps me strong whenever I face challenges. There are times when I face a big project and I worry about coping. But when my boss says well done, I know I chose the right career.”

The 32-year-old mother of two boys and a girl, all under the age of six is, among other things, responsible for the collection and analysis of plant data and execution of all the metallurgical activities, including laboratory milling, flotation test work and improvement aspects of the plant. She also finds time to mentor junior colleagues and is quick to acknowledge that she copes because she has a supportive husband. He is a store manager on the mine so understands her working environment.

“Part of my routine work is to look at the previous day’s production data, analyse them and discuss all issues with the other team members. I suggest solutions for issues and release daily, weekly and monthly reports. Throughout the day all problems have to be sorted in order to achieve our daily target”.

“Problems that need more data, time and resources become projects. Investigation is needed, as is test work in the laboratory. Equipment may be modified or upgraded – all to achieve a safe and productive working environment”.

“To be honest, most of the challenges I face are not due to working in a male-dominated world, they are purely related to professional problems. The men are very respectful, willing to help, and very supportive. As a woman you may be misjudged and sometimes undermined until you prove them wrong. Remember that first impressions last, so don’t sent the wrong signals.”

Gracia, who speaks English, French and Swahili, views her career in a sector noted for male dominance as a natural progression from her passion for maths, physics and science in high school. It helps that she grew up in an environment of achievers – her widowed mother is a business woman, her brother is a civil engineer.

She studied Chemical Engineering at the University of Johannesburg where, according to Professor A F Mulaba-Bafubiandi, she was an excellent student – punctual, disciplined and one of only a handful of girls in his class. He was not surprised to learn that Gracia is doing well and still closing the gender gap.

Asked what she does for fun, Gracia reveals, “I do aerobics twice a week but the kids keep me very busy.”

As Benjamin Disraeli said, ‘The secret of success is constancy to purpose’. Be positive, ready to learn from others, keep yourself motivated and give the best of yourself.

Africa holds 30% of the planet’s mineral reserves, including 40% of its gold, 60% of its cobalt and 90% of the world’s Platinum Group Metal reserves. The natural resources on the continent present a unique opportunity for shared growth and drastic reductions in poverty. Yet mounting evidence suggests the economic growth has not benefited a large portion of the population, or created decent jobs or reduced poverty at any significant rate. Africa is still home to 30% of the world’s poor.

The inequality patterns are particularly pronounced for women. The regional obstacles holding back gender equality include unequal access across the range of productive resources, including land, financial resources, information about markets and appropriate technologies.